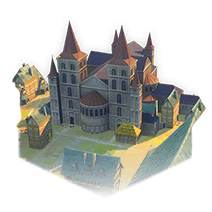 A palace for the emperor and a place of worship, this testifies to the close links between church and military power.

Imperial cathedrals (Kaiserdom in German) are religious buildings constructed by emperors of the Holy Roman Empire of the German nation. The most famous of these is the Speyer Cathedral, also known as the Imperial Cathedral Basilica of the Assumption and St Stephen, the largest Romanesque cathedral in the world. Construction began in 1030 under the reign of Conrad II. The cathedral was renovated several times, resulting in a fusion of Carolingian, Ottonian, and Lombard Romanesque architectural styles. Initially built to rival Cluny Abbey, the cathedral helped shift the focus of the Empire closer to the Rhine and had a significant influence on the architecture of contemporary Romanesque cathedrals. The colonnaded basilica has a large transept and deep choir square, and is built over the largest crypt from the Romanesque period. Consecrated in 1041, it was the burial site for a number of German sovereigns during the Middle Ages and contains the tombs of four emperors.