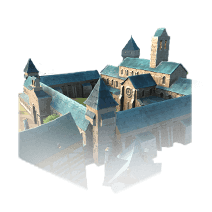 A certain level of abstinence must be endured to work here, but these ascetics produce glorious testaments to God's glory.

From the 8th to 12th centuries, monasteries were important economic hubs in medieval society. This resulted in them becoming basic administrative centers for the Merovingian and Carolingian kings, who paid monasteries generously in land and tax incentives and would frequently place members of the Frankish nobility at their helm. Monasteries were also important cultural centers where religious and ancient texts were studied, preserved, and copied. In a monastery or abbey, the scriptorium was the room devoted to the production of handwritten texts by monk scribes. Their texts, written on parchment, were then “illuminated” with miniatures, stylized letters, or abstract figures. It has been estimated that before the invention of movable type printing it would have taken over a year to copy a bible. The need to write quickly and uniformly led the monks to develop Carolingian minuscule. This style, named after Charlemagne, is the basis of contemporary Latin-based writing systems.