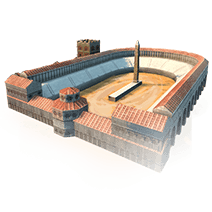 Thundering hooves, gleaming coats, plumes of dust -- citizens love nothing more than watching and placing wagers on the chariot races.

The Roman colony of Byzantium had a hippodrome from as early as the 3rd century. However, it was not until the following century when the city became the new capital of the Roman Empire under the name Constantinople that the hippodrome took on its final shape: a copy of the Circus Maximus in Rome. The monument subsequently became the center of social and political life in the city under the authority of the Byzantine emperors. Factions of supporters representing the various political groups would compete here, sometimes leading to riots. The emperor would appear before the people from his lodge—accessible directly from the palace—in a codified ritual intended to emphasize his omnipotence. At 450 m long and 80 m wide, it is estimated that the hippodrome could hold some 50,000 spectators. The chariots would race to complete seven laps around the ornately decorated “spina” in the center of the arena.