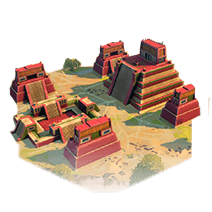 The insatiable appetites of the gods demand a steady flow of human blood -- earning gratitude and honor for the sacrificed.

As the chosen people of Huitzilopochtli—the hummingbird god of the sun and war—the Aztecs were responsible for maintaining the course of the Sun, the planets, and the Moon with their offerings. Generally speaking, all the Mesoamerican peoples made sacrifices to their gods to thank them for their divine blessings. In order to fulfill these obligations to the gods, the Aztecs built the city of Tenochtitlan, centered around a religious complex containing up to 78 buildings. A pyramid 45 m high topped with temples dedicated to Tlaloc and Huitzilopochtli overlooked the temple complex. A number of sacrificial pits containing offerings to the gods—objects (precious and common alike), foodstuffs, and animal and human remains—have been discovered in the city’s temples. The human sacrifices were most often men that had been captured during military campaigns and whose hearts would be removed on a sacrificial altar.