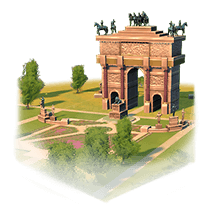 The triumphal arch is a monumental structure characteristic of Roman civil and military architecture. In its classic form, it is composed of two piers connected by an arch. They were erected at the city gates in Rome and the entrance to the forum, after a conflict, or to celebrate an important military victory. In the Roman world, the arch carried a powerful symbolic and religious meaning. Armies would pass through these arches following battle to purge themselves of their warring energies. This purification process would allow the soldiers to return to the peacetime role of citizen. The original structure would later become associated with triumphal ceremonies—the military and religious parades organized after a major victory against an enemy people. As a result, the arch was transformed into a triumphal monument and decorated with columns, inscriptions and statues of victorious generals.