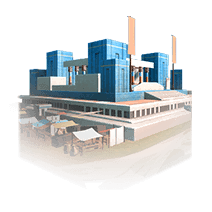 Sometimes it is prudent to give a degree of autonomy to the satraps -- provincial governors -- and let them handle distant matters.

The Achaemenid emperor was, according to his title, the “great king, king of kings, king of nations, king of this earth.” He had authority over his sovereigns, the satraps, who administered the satrapies, the sole rank in the imperial administration. A satrapy was not a region with fixed borders: the territory would fluctuate depending on the governing satrap’s sphere of authority. It had its own administrative network and often relied on preexisting elite groups and structures from the time of the Achaemenid conquest. The emperor would name a military commander and secretary for each satrapy, in theory acting as an extension of his authority in the kingdom. In spite of this, the satraps had a great amount of freedom in managing their domains as long as they collected taxes and provided enough troops to maintain order and fight in campaigns. In some years, the amount collected was equivalent to 388 tons of silver.