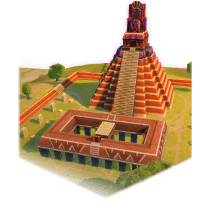 The steep stone steps of the k'uh nah means the house of the gods at its summit looks out imposingly over the city.

In Mayan cities, buildings were designed to reproduce the mythological landscape. Temples (k’uh nah in Mayan) were step pyramids that represented the sacred mountains and most likely the concept of the Flower Mountain, a paradisaic dwelling place and the source of food and water. Each aspect of the temple has a symbolic dimension. The nine levels of the Temple of the Inscriptions in Palenque thus correspond with the nine levels of the underworld. When added to the four levels below ground that house the tomb of King Pakal, they symbolize the thirteen celestial plains crossed by the tree of life. Although temples were tombs for the highest dignitaries, they were not designed to help the deceased pass through the realm of the dead. Indeed, they were more a means of conferring prestige upon the person associated with them, in life as well as death.