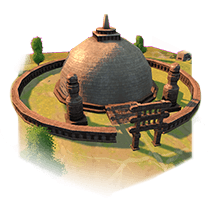 The stupa is the emblematic building in the Buddhist architectural style that is found in all regions where Buddhism is practiced. Although the majority of these temples are domes or spherical buildings, their style has changed a great deal over time. The Maurya dynasty reigned during an era of increasing popularity and growth for Buddhism, particularly after the conversion of Emperor Ashoka in 250 BCE. According to the chronicles, this emperor had over 84,000 stupas built throughout his empire to provide a place for the veneration of Buddhist relics. The oldest buildings in the great complex at Sanchi, erected around this time, are also some of the oldest Buddhist monuments on the Indian subcontinent. The majority of these temples are still major sites of pilgrimage and worship, with their own monasteries.