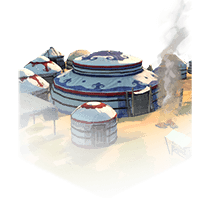 A nomadic camp, an ordu possesses tents and herds for self-sufficiency as well as training grounds for the military.

The term ordu (from the ancient Turk örgu) is the root of the modern word “horde”, which originally indicated a nomadic camp or a center of power rather than a group of people. The Huns did indeed practice "camp-based nomadism", living in a near-constant state of migration during periods of conquest and turmoil, where the conditions required people and their herds to regroup and move on a regular basis. However, as proved by a number of burial sites, certain locations were favored as gathering places (especially for wintering), in particular the famous “city of Attila,” located in present-day Hungary, as mentioned by a Byzantine embassy in 449. When the emperor’s envoys arrived at the site, they discovered a city of tents clustered around a hill. At the top was a royal palace built out of wood and surrounded by a high palisade lined with towers.