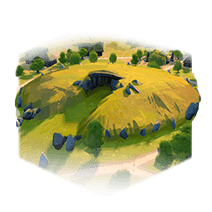 Large mounds of dirt accompanied by stelae and stone circles, tumuli are used by Goths to cremate or bury the dead.

The Goths left us with precious few archaeological remains. Largely consisting of dwellings made of wood and earth, simple tombs, and everyday objects, these traces are often intermixed with the vestiges of other populations with whom they coexisted. However, evidence of burial rites discovered in Pomerania dating from the second half of the 1st century are generally attributed to the Goths. They reveal the impact that migrants from Scandinavian peoples had on the indigenous population, which is backed up by sources from antiquity. These necropolises consisted of tumuli—mounds of earth that were built over stone structures holding the graves. In addition to these burial mounds, large stone circles have also been discovered above cremated or buried remains, often along with belongings and decorations of notable quality. These were not mere tombs, however, but the sites of ritual gatherings.