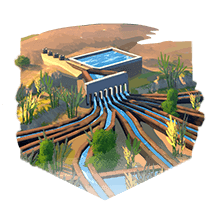 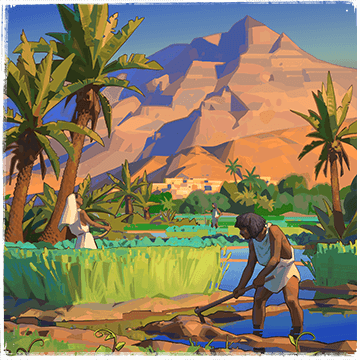 Underground aqueducts transport subterranean water to the surface - thus bringing life to even the most seemingly infertile ground.

Although the center of the Garamantian kingdom was around 1,000 km from Tripoli, in a region with a remarkably inhospitable climate, the Garamantes were able to develop a true oasis culture based on a particularly effective hydraulic system.
Indeed, in these regions, the annual average rainfall rarely exceeded 10 mm, and there would sometimes be no rainfall for several years. However, fossil water could be tapped at a shallow depth in the aquifers within the valley floor and then be transported out to the oases through underground irrigation channels known as foggaras.
This procedure, which minimized water evaporation, guaranteed groundwater flow by means of a slight incline towards the lower-lying areas. On the surface, vertical well-shafts were located at regular intervals along the underground channel for maintenance purposes, until the channels emerged into the open air where the water would then flow into the irrigated plots of wheat, barley, grapes, olives and date palms.