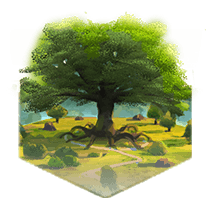 A sacred grove, benefiting all, but open only to the druids who conduct ritual ceremonies between the trees.

Archaeological digs in Celtic shrines have enabled us to learn more about the religious practices of these peoples. They revealed regional variations of a common religion in which rituals would take place in specific sites and situations. The Celts worshiped a pantheon of deities, the earliest of which we know very little about. They also venerated their ancestors and honored heroes famed for their feats of arms. Religious ceremonies were organized in restricted areas containing sacrificial pits and a sacred grove in which the gods would manifest themselves. The Celts would offer sacrifices of weapons, jewelry, animals, and the spoils of enemies to the gods of the underworld. Their religion relied on the work of druids, who acted as intermediaries between the people and the divinities and would lead the rituals, but also on bards, who kept the stories of their gods and their heroes alive through poetry and song.