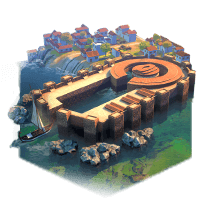 A vast harbor able to accommodate up to 220 ships, the cothon possesses both merchant and military sub-harbors.

In ancient times, a cothon referred to a man-made basin connected to the sea by a channel. The harbor in Carthage, described in detail in ancient records, is probably the most well known of these. Located within the city walls, the cothon was divided into two sections. Approaching from the sea, boats would enter the first section through a large entrance approximately 20 m wide that was closed off with an iron chain. It consisted of a rectangular basin surrounded by moorings, intended for commercial use. The boats could then enter a second, circular section that served as the military base. At the center was an island containing the offices of the admiralty, surrounded by a docking complex that could house up to 220 warships. An outer wall prevented outsiders from seeing the number of troops, the shipbuilding methods, and any war preparations being made by the Carthaginian fleet.