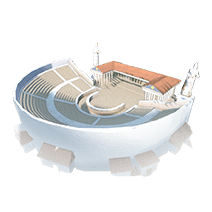 Comedies and tragedies provoke much intellectual thought in citizens, aiding the blossoming of philosophy.

Theater was an important aspect of Greek religious practices from the Mycenaean period onward. The form and style of performances changed over the centuries, but remained the favored means of addressing the gods. Associated with the cult of Dionysus, performances were held in dedicated architectural complexes called amphitheaters. The first spaces designed for public dance and theater performances date from the 7th century BCE; in around the 5th century BCE these evolved to take the shape of amphitheaters. These structures, built on a hillside, are characterized by their semi-circular rows of seats that gave a bird’s-eye view of the orchestra and the stage where actors, dancers, singers, and musicians would perform. Two hundred Greek amphitheaters located throughout the Mediterranean basin are still visible today.