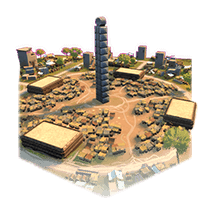 Used as graves for kings, the obelisks are among some of the tallest and heaviest monoliths humanity has ever erected.

The rulers of Axum built an important funeral complex in their capital city. This royal necropolis holds nearly 200 obelisks, each marking a burial site. Of these, six are notable for their monumental scale that has made them some of the tallest monoliths ever created by humankind. Hewed from a single piece of rock, the six great obelisks of Axum were hauled from granite quarries located over four kilometers from the city during the 3rd and 4th centuries. They stand between 15 and 32 m high and weigh between 75 and 517 tons. Most likely set high on the headland, they marked the burial sites of important rulers. The sides of these six obelisks, shaped like towers, are decorated with sculpted doors and windows.