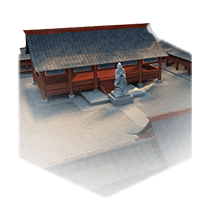 With loyalty to authority a central strand of the teachings of Confucius, inspired thought inspires exemplary conduct.

Confucius was a philosopher and teacher who lived in ancient China during the sixth century BCE. His philosophy was based on the concern of a moral and spiritual deviation on the part of the elites—and consequently of the people who looked to them as role models—when compared to the legendary period of the first kings of the Zhou dynasty. To correct this, he advised princes to surround themselves with wise counselors who could help them to govern virtuously, a function he performed on several occasions, but without success. It was only at the end of his life that he finally devoted himself exclusively to teaching his ideas to his followers. Upon his death, his followers spread his philosophy, notably thanks to the compilation of conversations with their master collected in a book known as theAnalects. The same principles are taught in the Confucian School, which, starting from the Han dynasty and lasting for several centuries, became the basic educational institute for civil servants and imperial counselors.