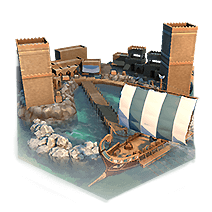 The Phoenicians settle in the heart of many bays, turning the coastal escarpments into natural protection for their ports.

The coast of ancient Phoenicia, present-day Lebanon, consisted of a number of bays interspersed with rocky headlands. These natural harbors allowed the coastal inhabitants to develop maritime sites that were protected by the terrain from the elements and other destructive forces. All Phoenician cities had two ports: one for commerce that was open and accessible; and one for the naval fleet built next to the city walls. Whenever these natural sites could not provide sufficient protection for Phoenician ships, they were reinforced by way of dikes and seawalls. The ports were also equipped with jetties, moorings, and boat sheds, known as the neoria. The Phoenicians’ skill in selecting the most suitable natural environments (islands, sheltered bays, river mouths) was also employed when founding numerous Mediterranean trading posts.