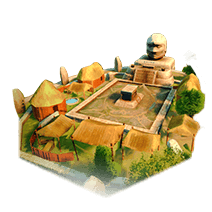 Towering many spans higher than a man, the statues imbue every soul who stands before them with powerful convictions.

The colossal heads are the most well-known symbol of the Olmecs. Yet the meaning behind these megalithic sculptures remains a mystery. To date, 17 heads have been found at four different sites. The first head was discovered in the mid-19th century at the Tres Zapotes site, and was the first discovery of the Olmec culture by archeologists. Weighing from 6 to 50 tons and standing as high as 3.4 m tall, the sculptures all represent male human characters, but their meaning and use are still unknown. The most popular theory is that they are portraits of leaders, high priests, warriors, or even Mesoamerican ballgame players, a sport already very popular in the Olmec period. However, new research suggests that they may in fact be sculptures representing the trophy heads of sacrificed enemies.