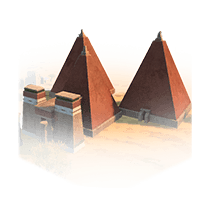 These burial grounds receive donations of luxurious objects befitting the status of their dead leaders, stimulating nearby commerce.

Built in the Egyptian architectural style to serve as royal tombs, the Nubian pyramids are a remarkable example of cultural synthesis. The Egyptians had stopped entombing their pharaohs in pyramids for centuries when the Nubians adopted this form of burial sometime around the 8th century BCE. While there are far more Nubian than Egyptian pyramids (over 200 concentrated mainly in present-day Sudan), they differ greatly in size: the Nubian versions are more pointed, built at an angle of approximately 70°, and are much smaller, measuring 6 to 30 m in height. In comparison, the Great Pyramid of Giza stands at 146 m tall. Many of these pyramids are now missing their peaks after an Italian explorer, Giuseppe Ferlini, blew them off in his search for hidden treasure during the 19th century.