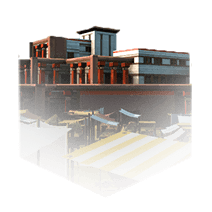 The term "Cyclopean" refers to an ancient masonry style characterized by the use of partially shaped, enormous stone boulders (megaliths) of various dimensions. Common throughout Anatolia and Crete, this building method spread to the Mycenaean civilization where it was used to fortify towns and palaces. Mycenaean cities were almost always built following the same pattern: on the side of a hill with the city palace towering overhead. These cities were protected by thick masonry walls made of roughly shaped stone boulders. The specific design of these massive walls differed at each site, but they all followed and emphasized the natural shape of the land they were built on. The Cyclopean wall wasn't just used to build fortifications; they were also found in the foundations of important buildings, such as royal palaces.