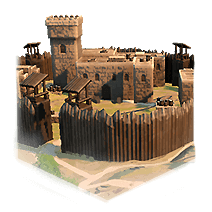 Hittites use special building techniques to erect Awari outposts, adapting to favorable terrain to give them the strategic upper hand.

Settled on the Anatolian high plateau, the Hittite peoples formed a network of small towns and fortified outposts called awari. They took advantage of the region’s mountainous topography to develop a particularly effective style of defensive architecture. The majority of Hittite urban structures were fortified, regardless of their size. Built high on a plateau or hill, they followed a precise plan and layout. Towns were surrounded by a line of fortifications made of two parallel walls filled with rubble and fieldstone. The base and foundations of these walls were built with large blocks of stone, which supported a structure of wood beams and mud bricks. The sites at greatest risk of external attacks had passageways under the ramparts to quickly fight off the besieging forces.