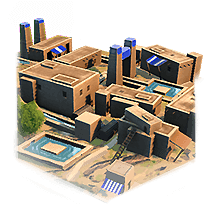 Harappan cities are often built around great rivers, where extensive use of canals can transform the surrounding land into fertile plains.

The remains of Harappan cities reveal a highly developed urban system. Arranged in a grid pattern, buildings were constructed using mud bricks, the dimensions of which were uniform for every city. The cities had pipe systems that supplied houses with water and flushed waste water away into covered street-side sewers: a remarkable feat at the time. In Mohenjo-Daro, the most well-preserved archaeological site, there is a rectangular water tank measuring 12 x 7 m long and 2.4 m deep. It was also constructed using mud bricks and had a tar seal to make it watertight. Known today as “the Great Bath,” it appears to have been used in religious ceremonies and is the oldest complex of its type ever found.