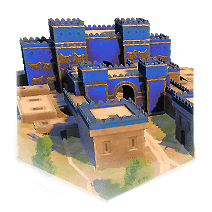 Babylonian inscriptions leave no doubt as to the importance of astronomy to the Mesopotamian peoples. While we have yet to find historical proof of any building strictly dedicated to the observation of celestial objects, most of the descriptions of such phenomena have been found on cuneiform tablets in temples and ziggurats. Priests from this region would interpret messages sent to them by their gods based on their astronomical observations. The Babylonian pantheon comprises seven major gods associated with seven celestial bodies (Sun, Moon, Mars, Mercury, Jupiter, Venus, and Saturn). The study of their position, movement, and luminosity was used to produce the key astrological predictions in the Babylonian belief system. The need for knowledge led the Babylonians to develop complex astro-mathematical models, which were used to predict eclipses and the movement of the stars.